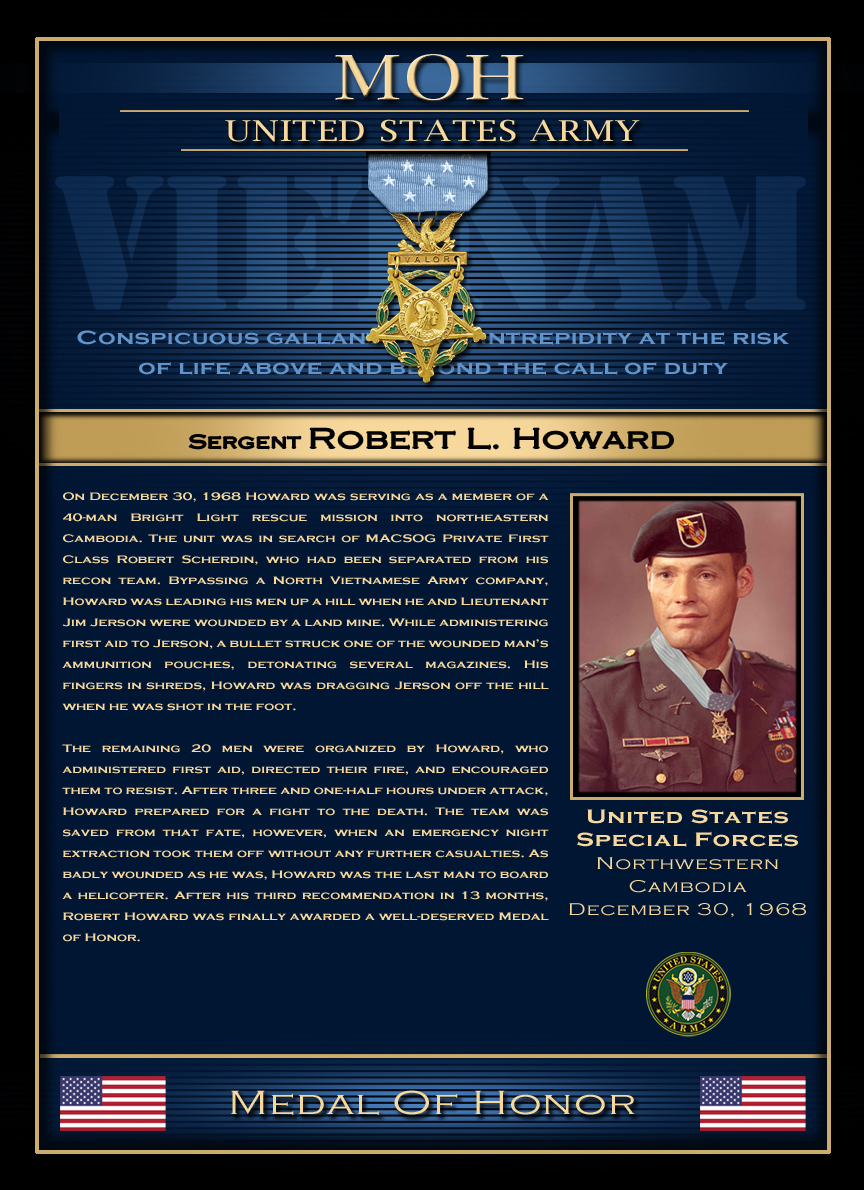 For conspicuous gallantry and intrepidity in action at the risk of his life above and beyond the call of duty. 1st Lt. Howard (then SFC .), distinguished himself while serving as platoon sergeant of an American-Vietnamese platoon which was on a mission to rescue a missing American soldier in enemy controlled territory in the Republic of Vietnam. The platoon had left its helicopter landing zone and was moving out on its mission when it was attacked by an estimated 2-company force. During the initial engagement, 1st Lt. Howard was wounded and his weapon destroyed by a grenade explosion. 1st Lt. Howard saw his platoon leader had been wounded seriously and was exposed to fire. Although unable to walk, and weaponless, 1st Lt. Howard unhesitatingly crawled through a hail of fire to retrieve his wounded leader. As 1st Lt. Howard was administering first aid and removing the officer’s equipment, an enemy bullet struck 1 of the ammunition pouches on the lieutenant’s belt, detonating several magazines of ammunition. 1st Lt. Howard momentarily sought cover and then realizing that he must rejoin the platoon, which had been disorganized by the enemy attack, he again began dragging the seriously wounded officer toward the platoon area. Through his outstanding example of indomitable courage and bravery, 1st Lt. Howard was able to rally the platoon into an organized defense force. With complete disregard for his safety, 1st Lt. Howard crawled from position to position, administering first aid to the wounded, giving encouragement to the defenders and directing their fire on the encircling enemy. For 3​1⁄2 hours 1st Lt. Howard’s small force and supporting aircraft successfully repulsed enemy attacks and finally were in sufficient control to permit the landing of rescue helicopters. 1st Lt. Howard personally supervised the loading of his men and did not leave the bullet-swept landing zone until all were aboard safely. 1st Lt. Howard’s gallantry in action, his complete devotion to the welfare of his men at the risk of his life were in keeping with the highest traditions of the military service and reflect great credit on himself, his unit, and the U.S. Army.