The Great One : Bobby Orr

From the late-1960s to the mid-1970s, Orr redefined the defence position in the NHL, being far more of a freelancing player than anyone before him at the position. But at the same time, Orr was far from a liability in his own end and was often used on the penalty kill. He was a fabulous skater and offensive generator, but Orr was strong on the defensive side, too. 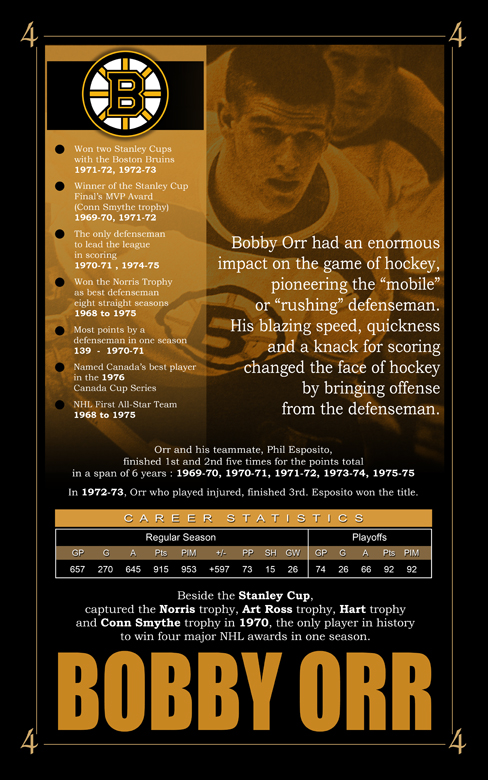 And even though when you look through his numbers and accomplishments he seems to have come from another world, Orr was still human and had his moments. Take, for instance, this story re-told by Don Cherry about the time Orr shot the puck into his own net.

“Boston Garden … No. 4, Bobby Orr, the greatest hockey player who ever lived, he went to shoot the puck in the corner just like [Kris Russell earlier this season], and picked the corner,” Cherry said. “There was deathly silence in the Boston Garden. Deathly. And nobody knew what to do, I didn’t know what to do. And he stood there, and somebody from the gallery goes, ‘Ah, don’t worry, Bobby! Cheevers should’ve had it!’ and everybody laughed.

But there were a lot of things Orr did that no one can do, and few, if any, NHLers have approached since. As we celebrate Orr’s 70th birthday, here are some amazing stats from his career.

+124: OK, so not everyone values the plus-minus stat the same way, and many would do away with it altogether as a tool to measure a player’s ability or impact. That’s fine. But even still, when you stack up Orr’s number in 1970-71 to almost anyone else’s (including even his own in any other year of his career) in recorded history, his performance that season shines among the all-time best.

Orr posted the insanely high mark in 1970-71, the year he won his second Hart Trophy. Six years later, Larry Robinson became the only player to ever challenge the mark when he finished with a plus-120 rating on an all-time best Canadiens team that finished with a 60–8–12 record.

To give you an idea of how unattainable that mark is in today’s NHL, the best plus-minus posted by any player in the salary cap era is plus-50 by Jeff Schultz on the high-scoring 2009-10 Washington Capitals. Plus-40 has only been reached seven other times in the past 13 years.

120 and 139: In the season before Orr posted his plus-124 rating, he also became the first (and still the only) defenceman to win the Art Ross Trophy. And it wasn’t even close.

Orr had posted 41, 31 and 64 points in his first three NHL seasons and hadn’t finished as a point-per-game player yet. Still, those 64 points he put up in his 20-year-old season set a new NHL record for offensive production from the defence position.

He started his fourth season (1969-70) as a 21-year-old and finished it as an all-time NHL record holder on a whole different level. Orr posted an incredible 120 points in 76 games to destroy all competition in the Art Ross Trophy race, finishing 21 points ahead of second-place Phil Esposito.

At the time, Orr’s 120 points were more than double the amount any other defenceman had posted in the league’s history. Pierre Pilote’s 59 points in pre-expansion 1964-65 were the most by a blue-liner before Orr came along. Orr was generating so much offence he blew past the defence scoring record he set a season earlier by the all-star game.

One season after posting 120 points, Orr went past even that mark.

In 1970-71, when Orr was setting the unbreakable plus-minus record, he was able to get there partly because he scored 139 points. That is a record to this day and was seriously challenged just once by Paul Coffey in 1985-86, but the Oilers defenceman fell just one short.

8: Despite being ranked among the best players to ever play in the NHL, right up there with Wayne Gretzky, Mario Lemieux, Gordie Howe or whoever you have at the top of your list, Orr was at the top of his game for only eight seasons.

After winning the Calder Trophy at 18, Orr dominated the NHL for the next eight years and redefined what a defenceman could do. From 1968 to 1975, Orr won all eight Norris Trophies, two Conn Smythes, two Harts and two Art Ross Trophies. But knee injuries started to take their toll and Orr was limited to just 10 games in 1975-76. After winning his eighth Norris Trophy at just 27 years of age, Orr played just 36 more games in the NHL before retiring at 31.

1.24: Orr won two Cups and Conn Smythes with Boston in ’70 and ’72 and played in a total of 74 Stanley Cup Playoff games in his career. Given he played in an era with fewer teams and post-season rounds, Orr isn’t close to the all-time record in post-season production, but when you look at his per-game average, Orr again has no peer.

Three defencemen in league history have averaged more than one point per playoff game with at least 12 played in their career: Orr, Brian Leetch and Paul Coffey. While Hall of Famers Leetch and Coffey finished with post-season point-per-game averages of 1.02 and 1.01 respectively, Orr is in a class of his own at 1.24: 92 points in 74 games.