Operation Masher (24 January—6 March 1966) was in early 1966 the largest search and destroy mission that had been carried out in the Vietnam War up until that time. It was a combined mission of the United States Army, Army of the Republic of Vietnam (ARVN), and Republic of Korea Army (ROKA) in Binh Dinh province on the central coast of South Vietnam. The 3rd Division of the communist People’s Army of Vietnam(PAVN), made up of two regiments of North Vietnamese regulars and one regiment of main force Viet Cong (VC) guerrillas, controlled much of the land and many of people of Binh Dinh province which had a total population of about 800,000. A CIA report in 1965 said that Binh Dinh was “just about lost” to the communists. 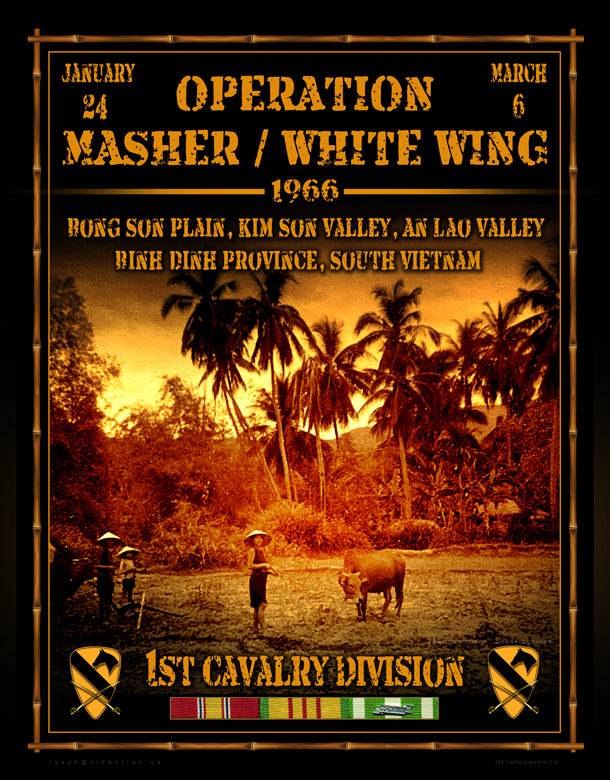 The name “Operation Masher” was changed to “Operation White Wing”, because President Lyndon Johnson wanted the name changed to one that sounded more benign. Adjacent to the operational area of Masher/White Wing in Quang Ngai province the U.S. and South Vietnamese Marine Corps carried out a complementary mission called Operation Double Eagle.

The 1st Cavalry Division (Airmobile) was the principal U.S. ground force involved in Operation Masher and that operation was marked as a success by its commanders. Claims are made that the PAVN 3rd Division had been dealt a hard blow, but intelligence reports indicated that a week after the withdrawal of the 1st Cavalry PAVN soldiers were returning to take control of the area where Operation Masher had taken place. Most of the PAVN/VC had slipped away prior to or during the operation, and discrepancy between weapons recovered and body count led to criticisms of the operation.

Allegations that there were a reported six civilian casualties for every reported PAVN/VC casualty during the Fulbright Hearings prompted growing criticism of US conduct of the war and contributed to greater public dissension at home. During Operation Masher, the ROK Capital Division were alleged to have committed the Bình An/Tây Vinh massacre on 26 February 196]. The operation would create almost 125,000 homeless people in this province, and the PAVN/VC forces would reappear just months after the US had conducted the largest search and destroy in the war up to that point.

Binh Dinh province was a traditional communist and VC stronghold. Binh Dinh consisted of a narrow, heavily cultivated coastal plain with river valleys separated by ridges and low mountains reaching into the interior. The vital artery of Highway 1 ran north and south ran through Binh Dinh. The area of Operation Masher was about 30 miles (48 km) north to south and reached a maximum of 30 miles (48 km) inland from the South China Sea. The U.S. Marine’s Operation Double Eagle extended northward from Masher and the ROKA’s Operation Flying Tiger extended southward. South Vietnamese forces participated in all three operations.

The First Cavalry Division (Airmobile) was selected by U.S. Commander William Westmoreland to carry out the operation. The 1st Cavalry had born the brunt of the combat during the Siege of Plei Me and the Battle of Ia Drang in October and November 1965 and some battalions of the 1st Cavalry had sustained heavy casualties. More than 5,000 soldiers in the division were recent arrivals in Vietnam with little combat experience. The South Vietnamese 22nd Division stationed in Binh Dinh had also suffered heavy casualties in recent fighting and was on the defensive.

The opposition to the American and South Vietnamese units participating in Operation Masher/White Wing was the PAVN 3rd Division consisting of approximately 6,000 soldiers in two regiments of North Vietnamese regulars who had a recently infiltrated into South Vietnam via the Ho Chi Minh trail and one regiment of VC guerrillas who had been fighting the South Vietnamese government since 1962. The majority of the population of Binh Dinh was believed to be supportive of the communist forces.

The plan of Operation Masher was for the U.S., South Vietnamese and South Korean soldiers to sweep north and for the U.S. and South Vietnamese marines to sweep south catching and killing the communist forces between the allied forces. Orders for the U.S. forces in Operation Masher were to “locate and destroy VC/NVA units; enhance the security of GVN [Government of South Vietnam] installations in [provincial capital] Bong Song, and to lay the groundwork for restoration of GVN control of the population and rich coastal plain area.” The primary metric for judging the success of the operation would be the body count of PAVN/VC soldiers killed.

Operation Masher officially began on January 28, but preliminary movements began on January 25 as the 1st Cavalry moved by land and air from its base at Camp Radcliff to the village of Phu Cat and to establish a division forward headquarters near the provincial capital of Bồng Sơn which was securely held by the ARVN. That first day of movement, however, was marred when a C-123 carrying troops of the 2nd Battalion, 7th Cavalry from Camp Radcliff to Bong Son in preparation for the operation crashed into mountains near An Khe, killing all 4 crewmen and 42 passengers on board.

On January 28 three Project DELTA U.S. Special Forces teams consisting of 17 personnel were inserted in the An Lao Valley for reconnaissance. The teams ran into immediate trouble and when rescued a day later seven had been killed and three wounded. Project DELTA Commander Major Charles Beckwith was seriously wounded while extracting the teams. Beckwith was criticized for going into the An Lao valley, under VC control for 15 years, without South Vietnamese counterparts and ground intelligence and in poor weather.

A landing zone for American troops north of Bong Son.

Phase One: Bong Son (See also Battle of Bong Son) Operation Masher began officially on 28 January 1966 with the helicopter insertion of 1st Cavalry units at several landing zones west of Highway One, 5 miles (8.0 km) to 10 miles (16 km) north of the town of Bong Son and on the coastal plain which consisted mostly of rice paddies separated by scattered forests and hamlets. The ARVN operated east of Highway One toward the coast. Bad weather hampered the movement. U.S. troops on the ground were attacked by a reinforced PAVN battalion. Several helicopters were damaged or shot down and were unable to land their complement of soldiers. Tactical air strikes by the U.S. Air Force the next morning assaulted the communist positions with napalm and other bombs and opposition tapered off. The engagement at Landing Zone 4 is sometimes referred to as the Battle of Cu Nghi. Search and destroy operations by the Americans for the next few days found few PAVN/VC soldiers and the Bong Son operation was terminated on February 4.

Casualties on both sides were substantial. The U.S. claimed that it killed 566 PAVN/VC soldiers at a loss of 123 American dead (counting the 46 lost in the airplane crash). Two helicopters were shot down and 29 damaged.

Phase Two: An Lao valley. The An Lao river valley, 10 miles (16 km) to 15 miles (24 km) northwest of Bong Son and the surrounding highlands were the next target of the 1st Cavalry. Bad weather delayed the beginning of the operation from February 4 to 6. The U.S. Marines blocked the northern entrance of the valley, the ARVN blocked the southern entrance, and three battalions were landed in the valley, however the PAVN/VC forces had withdrawn. The 1st Cavalry discovered large caches of rice and defensive works, but reported killing only 11 PAVN/VC soldiers at a loss to American forces of 49 wounded.

The U.S. offered to assist the inhabitants in the An Lao valley to leave the valley and escape from PAVN/VC rule and 4,500 of 8,000 occupants did so. The U.S. reported that 3,000 people were moved by U.S. helicopter, the others leaving the valley on foot. However, the “voluntary” nature of the departure of the people in the An Lao valley was questioned by an American journalist who also reported that the displaced villagers had been placed in a camp in which living conditions were very poor.

Phase Three: Kim Son Valley. The Kim Son Valley consisted of seven small river valleys about 15 miles (24 km) southwest of Bong Son. Three American battalions were deployed to the valley. On 11 February the 1st Cavalry established ambush positions in the highlands at the exits to each of the valleys and on 12 February began a sweep up the valley and outward, hoping to catch the PAVN/VC as they retreated. Initially unsuccessful, on 17 February three companies of the 1st Cavalry found a PAVN anti-aircraft artillery battalion and decimated it with air strikes and artillery, claiming 127 PAVN killed in the battle.

On 18 February, two platoons of Americans came across a heavily defended area in the eastern part of the Kim Son Valley. They called the area the “Iron Triangle” (not to be confused with the better-known Iron Triangle near Saigon). The area was assaulted by 1st Cavalry units, artillery, and B-52 air strikes. On February 22, the area was secured at a cost of 23 American deaths and an estimated minimum death toll of 313 PAVN/VC killed. Illustrating, however, that the VC were still in the area. a force of 15 to 20 ambushed an American patrol on February 28, killed 8 Americans, and captured their weapons.

Phase Four: Cay Giap mountains. The final phase of Operation Masher, March 1–6, was in the Cay Giap mountains, 5 miles (8.0 km) east of Bong Son. American intelligence indicated that a PAVN battalion was hiding in the mountains. An ARVN division surrounded the mountains and stationed a fleet of small vessels off shore to prevent the PAVN/VC from escaping by sea. A heavy land, air, and sea bombardment of the mountains was followed by a three battalion sweep by the 1st Cavalry. The ARVN claimed to have killed about 50 PAVN/VC, but most of the PAVN had left the area before the assault.

With the completion of Operation Masher on March 6, the 1st Cavalry withdrew from Binh Dinh Province, returning to its base at Camp Radcliff.