HMM-164 brought the first CH-46 Sea Knighthelicopters into Vietnam when they landed at Marble Mountain Air Facility after transiting from the USS Valley Forge (LPH-8) in March 1966.[3] HMM-164 remained in Vietnam for a three and one-half years as part of Marine Aircraft Group 16 (MAG-16). During their time in country they operated in and around the following areas: Quảng Trị, Đông Hà, Khe Sanh, Huế, Phu Bai and off the decks of the USS Princeton (LPH-5), the USS Tripoli (LPH-10) and the Valley Forge. While in Vietnam, HMM-164 supported US forces in all the major operations, most notably in Operation Hastings and Operation Meade River. On July 15, 1966, while conducting the initial insertion of ground forces during Operation Hastings the squadron lost three CH-46A Sea Knights in the vicinity of LZ Crow near Con Thien. Two aircraft crashed when their rotorblades intermeshed while trying to avoid Marines on the ground and the third crash was caused by heavy ground fire.[4]

In October 1969, the squadron left South Vietnam and relocated to Okinawa, Japan where it joined Marine Aircraft Group 15 (MAG-15). From October 1969 through April 1972, it deployed with elements of the United States Seventh Fleet as part of a special landing force. HMM-164 supported combat and search and rescue operations off the coast of Vietnam until April 1972 when it deployed aboard the USS Okinawa. While aboard the Okinawa, HMM-164 continued to provide Joint Service combat support in Operation Song Than and Operation Lam Son 719 until returning to Marine Corps Air Station Futenma, Okinawa in 1973. 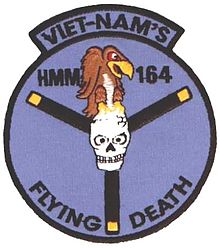 Squadron logo when they were HMM-164

After the withdrawal of American forces from Vietnam and the squadron’s subsequent transfer to Marine Aircraft Group 39(MAG 36), HMM-164 participated in numerous peacetime operations aboard naval shipping traveling to Korea, the Republic of the Philippines, and Japan as well as many exercises in Okinawa.

A detachment from the squadron participated in the evacuation of Americans from Phnom Penh, Cambodia, on April 12, 1975, as part of Operation Eagle Pull. On April 30, 1975, an HMM-164 CH-46D crew lifted the last Americans out of Vietnam when they picked up the Marine combined security force during Operation Frequent Wind.[5]